Fans waiting for new details about Sony’s upcoming PlayStation 5 can now get a first look at how they’ll be playing their next generation games. It’s not the console, rather the new controller. Announced on the PlayStation Blog, Sony has revealed the first images of the PS5’s new controller. Named “DualSense”, Son ...

180 of the world’s top dirt late model racers, both from the real world and sim racing, will take on the Dirt Track at Charlotte this Tuesday through Thursday in the 13th Annual Schaeffer’s Oil Spring Fling presented by Victory Lane Racing. From defending event winner Dylonn Fox to defending World of Outlaws Morton Buildings Late Model ...

No matter what kind of racing you’re into, chances are you’ll find something you love on tonight’s iRacing menu! Here’s a look at some of what we have going on:

The second day of NBC eSports’ Short Track iRacing Challenge will have a lot to live up to after yesterday’s debut at Rockingham Speedway. But with two more spots on the line for the championship race at Martinsville Speedway, another all-star cast of drivers will be ready to match the standard set by William Byron in his sweep of yesterday’s pair of races.

Night 2 of the @NASCARonNBC eSports Short Track @iRacing Challenge is tonight at 7pm ET on @NBCSN.

The World of Outlaws has been drawing in names from any and every form of racing to take part in invitational events, and tonight’s race will be no exception. 50 drivers will be battling for their share of a $1,000 prize at Knoxville Raceway, with drivers like Christopher Bell and Kyle Larson expected to figure prominently in the fight.

With a purse of over $14,000 and $4,000 to the winner, the 13th annual Schaeffer’s Spring Fling will pit many of the top names in the iRacing World of Outlaws Morton Buildings Late Model World Championship against standout real-world racers like Bobby Pierce and Brandon Sheppard. But to get to the main event, drivers will have to make their way through two days of heat races, starting tonight.

After two races in NASCAR Cup Series cars, The Replacements make the switch to street stocks at Myrtle Beach Speedway. Kevin Harvick fans will get the first chance to see their driver in action in what should be one of the most physical races of the season.

Here’s your preliminary, unofficial-but-probably-pretty-close @LeafFilter Replacements @iRacing Series entry list for tonight’s event.@KevinHarvick and @Bobby_Labonte will also join us so now my bid for a top-15 finish just dropped to a hopeful top 20. #LeafFilterReplacements pic.twitter.com/fldPnQ1xfW

Six-race series to feature world-class racers battling for $10,000 purse for charity Starting on Friday, April 10, the world’s top rallycross drivers and a host of crossover all-stars from NASCAR, IndyCar, NHRA, and more will do battle on iRacing in the Subaru iRX All-Star Invitational presented by Yokohama. Action sports legend Travis Pastran ...

Although we’ve seen plenty of esports events stepping in to fill the gaping gulf in the world motorsport calendar, they’ve all been rather serious affairs on rather serious sims (and bizarrely serious results). With Assetto Corsa Competizione, rFactor 2, and iRacing all staging events, there’s not been much hosted on the more accessible racing games. That’s set to change this afternoon, courtesy of Renault Sport.

The F1 team, along with its esports crew Team Vitality, and the International GT League, is hosting a pro-celebrity race at 1600 UTC this afternoon, April 7, entirely run within Gran Turismo Sport. It’ll be the first true live multiplayer GT Sport event we’ve seen since the Sydney World Tour back in February, and with the cancellation of the Nurburgring World Tour in May, we were getting a little worried. 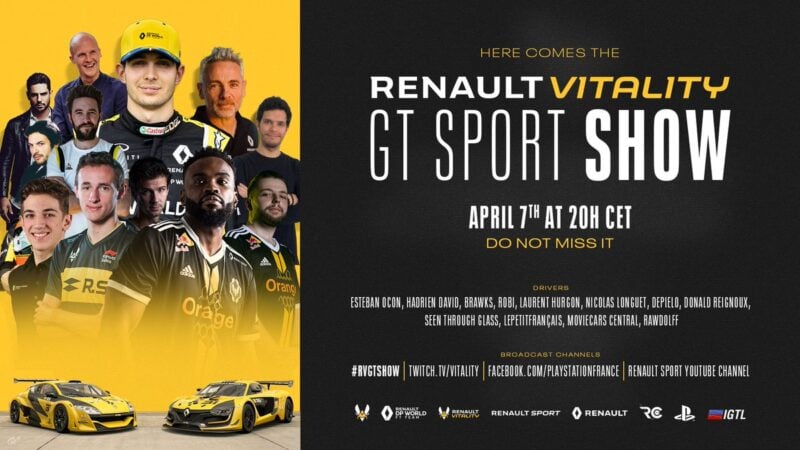 Renault has put together an interesting mixture of names, some of which may not be all that familiar. One that should need no introduction is Renault Sport F1 driver Esteban Ocon, who should have been back in F1 for 2020 if not for the pause in proceedings.

Joining him is French F4 driver, and 2019 champion, Hadrien David. Completing the real racing driver lineup is Laurent Hurgon. If you don’t recognize the name, you’ll recognize his achievements with the Renault Megane at the Nurburgring — repeatedly setting the fastest FWD lap at the Green Hell.

For the English language stream, the commentary team is actually two World Tour drivers — and GTPlanet members. Martin “Tidgney” Grady and Lewis Bentley will guide you through all the action, which you can watch below.

It was a family affair at the front of the field in Monday night’s iRacing World of Outlaws NOS Energy Sprint Car World Championship action from Fairbury American Legion Speedway, as brothers Dillon and Austen Semmelmann scored the top two spots in the 35-lap feature. Blake Cannon scored his second podium of the season in third, while defendi ...

Car manufacturers and designers like their vehicles to be distinctive and on-brand from all angles. They spend millions on imposing certain stylistic flourishes across their range, from the tiniest little hatchback to the most enormous SUV they make.

Though you might spot it most readily in the front ends, or little nods here and there — like BMW’s Hofmeister-Knick — it doesn’t end there. The designers even tweak the tail lights for family resemblance, or historical cues to let you know that an ancestor inspired them in the design of their new car. Alternatively they forget all about them and buy in a load of cheap light units from Ford or a coach manufacturer.

With this in mind, and Polyphony Digital’s reputation for visual accuracy in modeling — if you ever visit PD’s library you’ll find random tail light units the team bought as spare parts in the early days, in order to replicate them in the game — we’ve put together a little quiz.

There’s ten cars here, and all we want you to do is identify them by just their brake lights. We promise we haven’t put the Toyota 86GT in this time…

Can you tell what these ten GT Sport cars are, just from their brake lights? 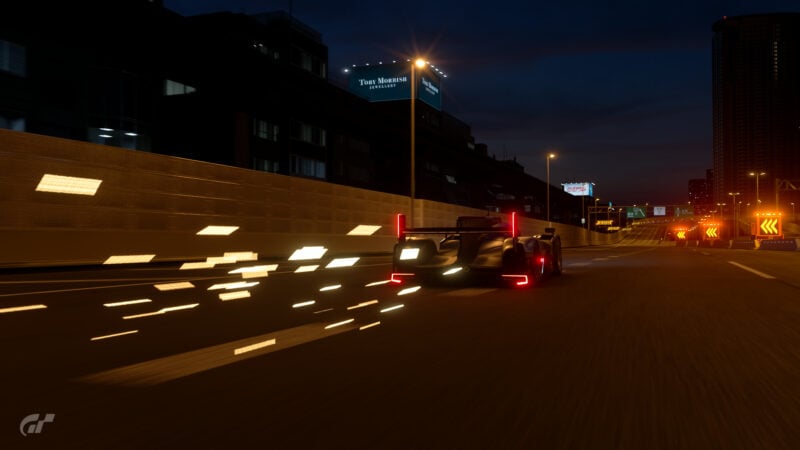