As a new Summer season makes its appearance in Forza Horizon 4 , players at the festival will notice a major change in regards to activities. With Series 38 now underway, the Festival Playlist now forms the Forza Mixtape, with previous events and prizes returning from between Series 7 and Series 32. This week puts Mini in the driving seat, alongside ... 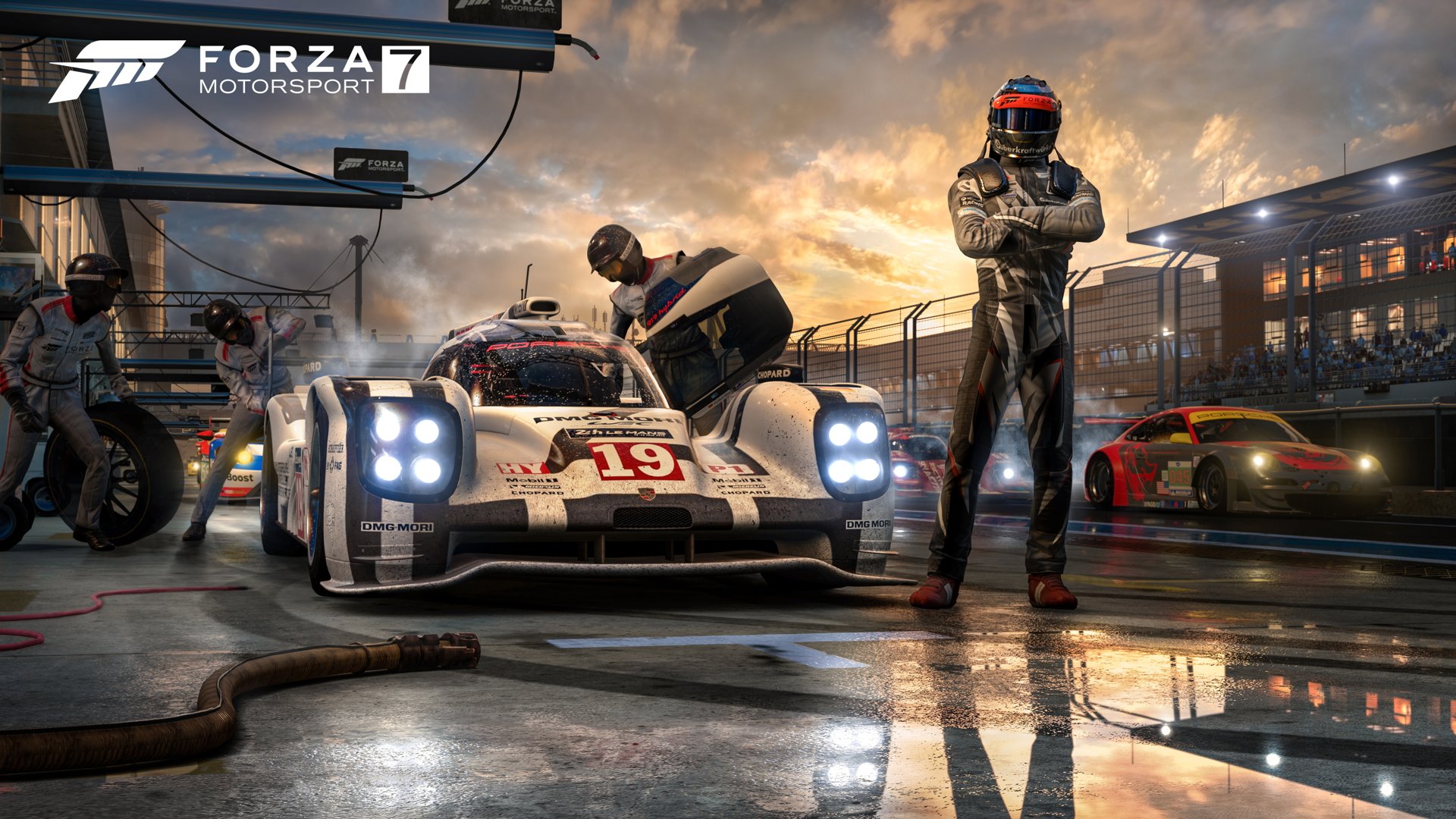 Forza Motorsport 7 will shortly be no more, as Microsoft moves the game into end of life status this September.

Seven weeks from now, on September 15, Microsoft will remove FM7 and all of its associated DLC from all online storefronts and the Xbox Game Pass service. This means that, as of that date, players won’t be able to purchase the game or any content digitally — though anyone who has already purchased the base game and any DLC will still be able to download it.

With the game’s availability on Game Pass, some players may have bought add-on DLC but not the base game itself. Microsoft will distribute tokens to those players through to August 2 to allow them to continue playing with their DLC purchases. However, don’t rush to pick the DLC up right now, as that only extends to customers who’d bought any ahead of this announcement!

While the game won’t be available to buy any more, the game’s services will remain accessible. That includes multiplayer and online modes, and Microsoft will continue to support FM7-based esports series and Rivals events.

Nonetheless, the move comes as something of a surprise. At present, FM7 is the most recent title in the Motorsport series, with the successor title — known only as Forza Motorsport — still in development. It’s unlikely we’ll see the new title until well into 2022 at least, leaving something of a gap without an active title in the series. Of course Forza Horizon 5 will launch this November, but the Horizon games are a very different package.

While every licensing agreement is different, it simply appears to be the case that some of those that apply to Forza Motorsport 7 — whether gameplay elements like cars and tracks, or even aspects like music — are time-limited, and in this case to four years or less, given the October 2017 launch. Smaller items could be patched out, so it seems likely that this affects larger items like circuits, or even a wide selection of content which is unfeasible to remove.

If you haven’t already bought Forza Motorsport 7, Microsoft is offering the title at discounted prices right now and running up until September 15: 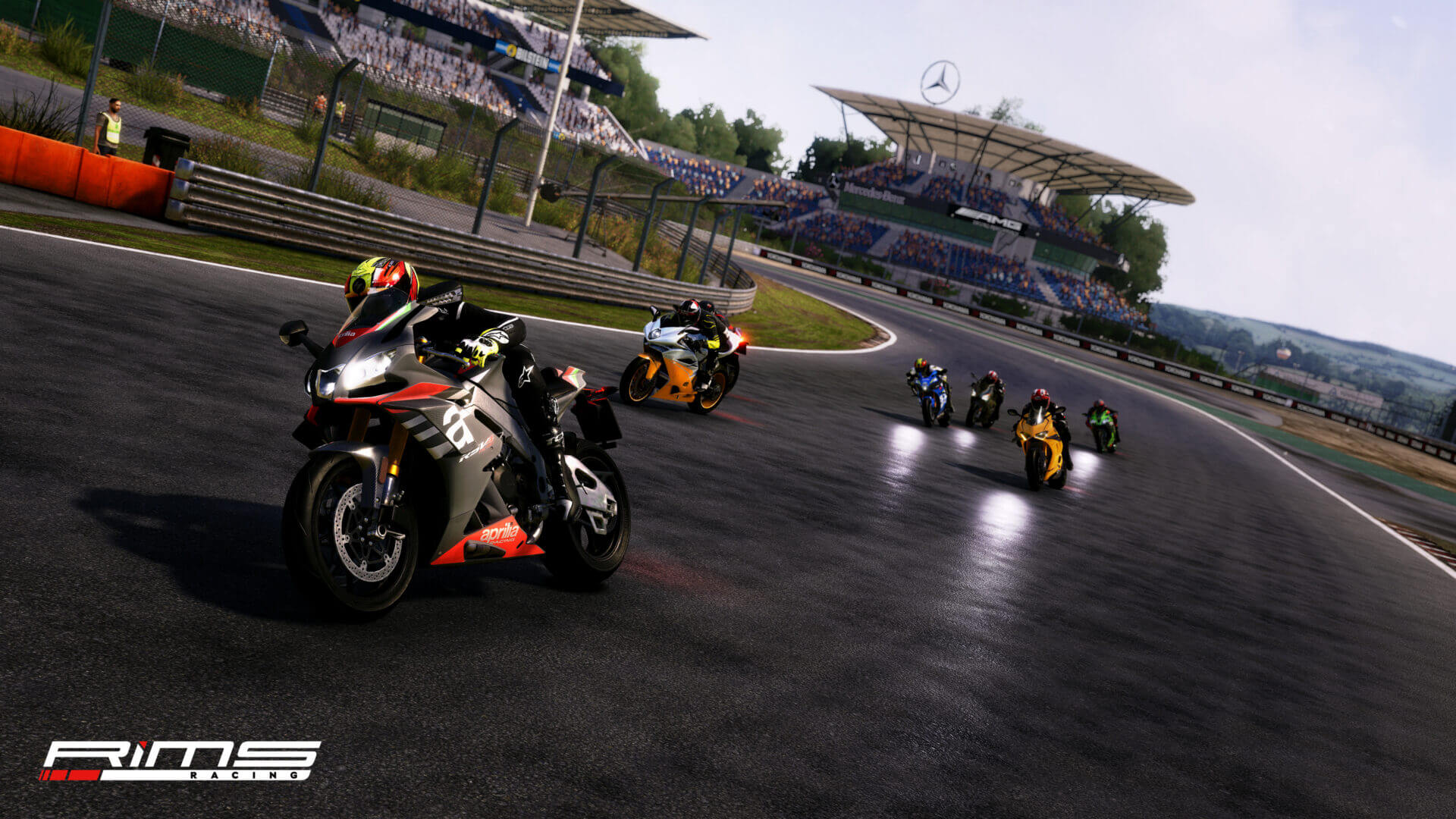 With the launch of RiMS Racing now only three weeks away, the game’s developers, RaceWard, have published some videos showing a behind-the-scenes look at the development process.

The two “dev diary” videos are part of a series that will run right up to the game’s launch on August 19. RaceWard intends to post up a new video each Thursday, at 1300 UTC, to show a new aspect of the production.

With the first video in the series, RaceWard provides an overview of the entire development. Marco Ponte, the CEO of RaceWard and creative director of RiMS Racing, takes viewers through the game from introductory research two and a half years ago through to partnerships with manufacturers, in order to create a simulator of not just riding a motorbike but of the bike’s individual components.

The second video, published today, is a more detailed look at the game modes and courses in RiMS Racing. That includes the defunct Circuito de Monsanto, which RaceWard modelled using previous studies of the track.

Game designer Alessandro Carullo talks through the physics model, for which RaceWard collaborated with Politecnico di Milano, a university in Italy specializing in engineering and design. The team explains that the model allows for real-time tire wear calculations which depend on the players’s riding style.

There’s also discussion of the various items of riding gear that players can choose from – catering to both amateur and professional riders – with a visit to Dainese in Vicenza to look at its products.

One of the PlayStation 5’s most useful features, the ability to expand internal storage, looks set to become available over the next couple of months — and already we know one product that will fit the bill. The console’s unusual 825GB internal storage was a point of curiousity when first revealed in 2020. Despite the creeping incr ...

PlayStation 5 Reached 10 Million Sales in the Fastest Time Ever

Sony’s PlayStation 5 has officially passed the 10 million units sold mark, and in the fastest time ever for a home games console. An announcement from Sony reveals that it registered its ten-millionth PS5 sale on July 18, some 248 days after it launched on November 12, 2020 . That’s an average of over 40,000 consoles a day, every day, glo ...

Both the 2021 and 2020 finals of the eSports WRC series are set to take place over the next six weeks, with official rounds of the 2021 World Rally Championship playing host. As with so many other things last year, the 2020 live final was postponed from its original date in October 2020, but it now has a new date and location. The ten finalists will ...

This AE86 Toyota Corolla Just Sold For a Record-Breaking $64,000

Despite the impending approach of the death of internal combustion — or perhaps because of it — classic car prices seem to be only heading upwards right now. Case in point, this 35-year old hatchback which just sold at auction for a record price of £46,000 ($63,785). The car in question is a 1987 Toyota Corolla. A relatively humble ...

Here Are the 11 Biomes Featured in Forza Horizon 5

In the fourth entry in the “Let’s Go” series , Playground Games revealed more about Mexico’s biomes in the upcoming Forza Horizon 5. As featured in the game, Mexico will be divided into 11 distinct biomes, each of which bearing the usual painstaking details known to the franchise. As previously revealed, PG used photogrammetr ... 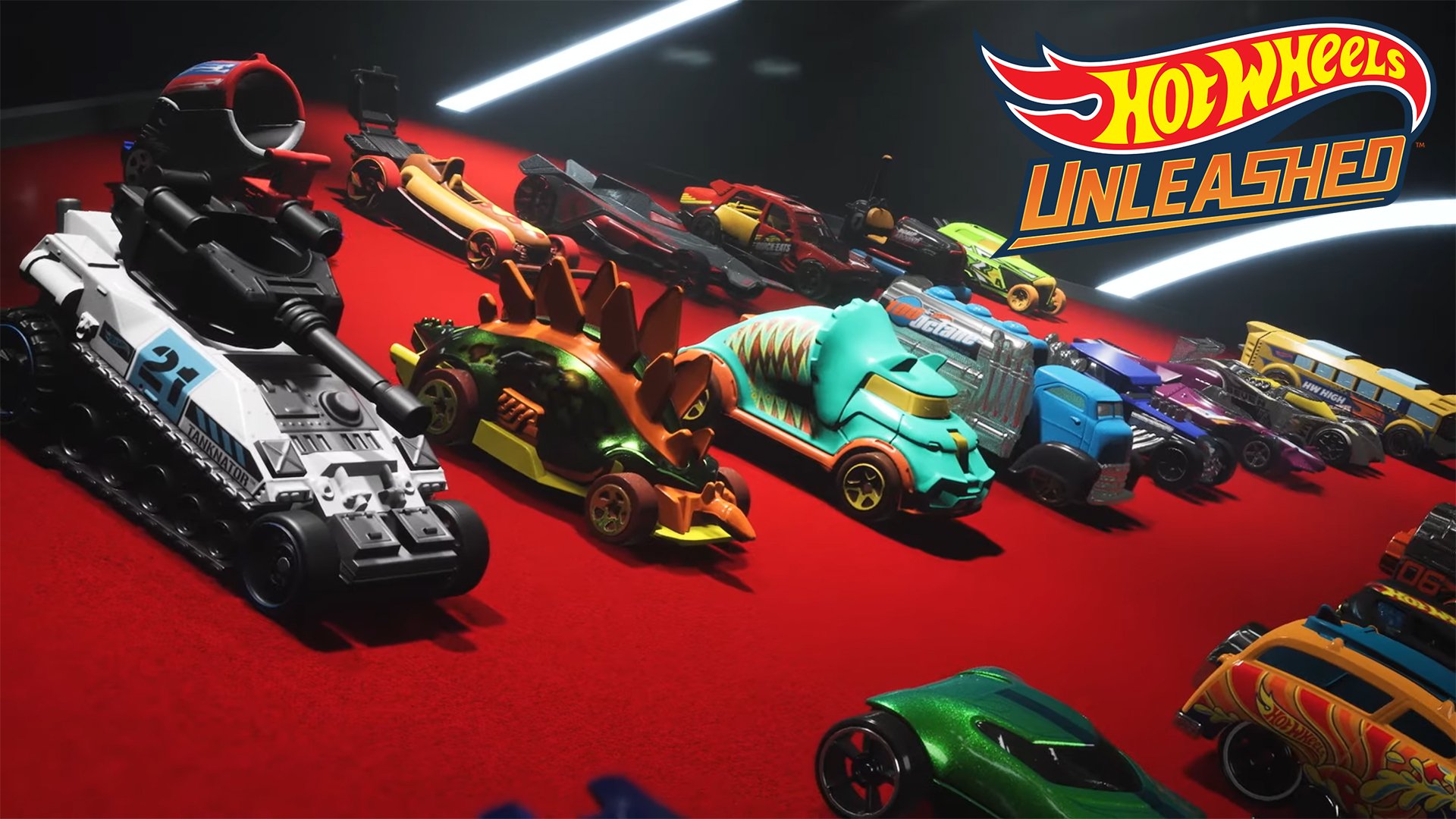 Milestone has revealed the remaining vehicles that players will be able to drive in Hot Wheels Unleashed in a brand new trailer today.

When the game launches on September 30, players will be able to drive 66 toy cars on the famous orange track. We’ve already seen a significant number of these in other videos, all fictional machines with their own unique looks and names — like the dinosaur-based Tricera-Truck, or the motorized cannon called Boom Car.

However, that’s not all you’ll be able to drive in HWU, as the game will also feature some other models from Mattel’s Hot Wheels range, some of which are real vehicles.

The selection revealed today includes some of the most famous cars from the big and little screen. Knight Rider‘s KITT, the DeLorean time machine OUTATIME from Back to the Future, and the Batmobile from Batman: The Animated Series will all be available. You’ll also be able to drive the Turtles’ Party Wagon from Teenage Mutant Ninja Turtles, and Snoopy’s kennel from the Peanuts comic strip.

If real cars are more your thing, there’s also Hot Wheels versions of a selection of road cars. The 20-strong “Original Manufacture” cars include hatchbacks like the FIAT 500 and MINI Cooper S, sports cars like the Honda S2000, and even the Koenigsegg Jesko hypercar. There’s also some classics pony cars and trucks, just to cover all the bases.

By our count that’s not quite all 66 cars, but Milestone does say that players can pick up additional vehicles by playing the game in various different game modes. However, at the moment the full list looks as follows:

Finally, though not visited specifically in the new trailer, Milestone has commented on the “Rarity System” we spotted on our preview play test last month. This will allow players to collect and disassemble their cars so that they can upgrade them and make them faster. Quite how this will work remains a mystery for now, but it’s also pointed out that some vehicle upgrades are only available through certain secret methods…

Hot Wheels Unleashed will launch on September 30 across PlayStation 4/5, Xbox One/Series, and PC via Epic and Steam. 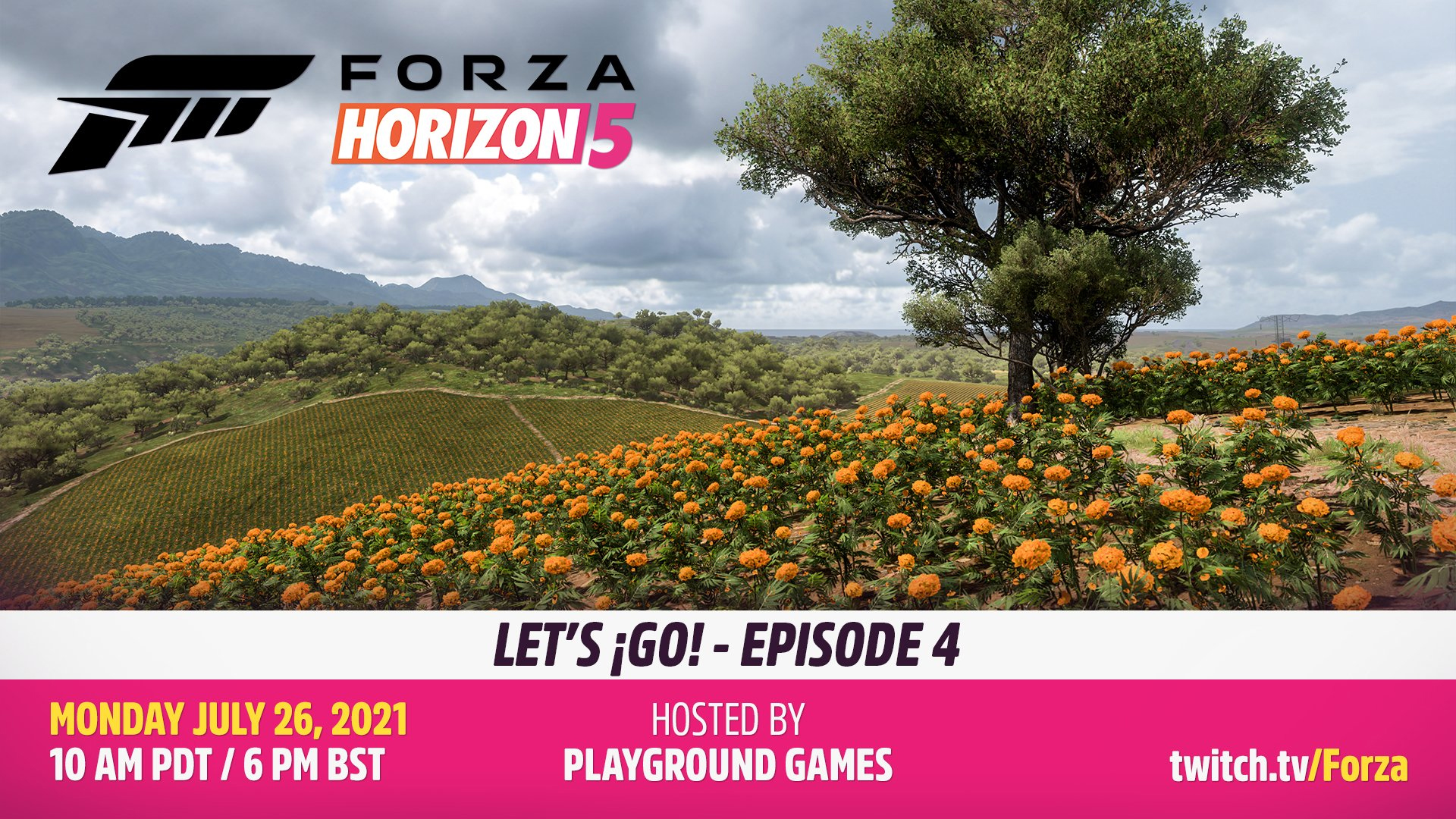 Playground Games will broadcast a new stream in its “Let’s Go” series today, revealing more details about the next game in the Forza Horizon series, Forza Horizon 5.

It’ll be the fourth video in the series, following on from the original launch show, a look at how the team captured the skies of Mexico, and an in-depth discussion of the game’s new audio standards last time out.

This time, the episode’s focus is Mexico itself, and specifically the virtual version’s interpretation of the country’s “biomes”. If you’re not familiar with the term, a biome is a region covered by relatively similar climate conditions which sees the same sort of flora and fauna populating it; in gaming terms, it means areas of a certain geographical kind: desert, forest, tundra, lowlands, mountains, and so on.

For Forza Horizon 5, these biomes will consist of regions like living and sand deserts, hills and the already famous volcano, tropical and rocky coasts, farmland, jungle, swamp, and some urban biomes such as the feature city of Guanajuato.

Though the FH5 map is a stylized version of the country, each of these biomes is inspired by a real area within Mexico. As with the previous video on capturing the sky, we’ll likely hear about Playground’s trips to Mexico to record the essence of these regions for digital recreations.

The stream will go live at 1730 UTC, and you can catch it in full below:

As with episode three of Let’s Go, the stream will follow on from the regular Forza Monthly show. This month’s instalment will detail what’s coming up in Series 38 of Forza Horizon 4, and we’re due for something of a shift in format for the update which arrives in August.

That’s because Series 37 was the last update with planned vehicle content, as the Playground Games team moves to FH5 to ensure the game lands this November. This doesn’t mean the game’s support has ended — there are unspecified plans for 4‘s future we’re likely to see after 5 arrives — but from Series 38 and on we’ll see recycled content from previous Series, starting at Series 2.

The Forza Monthly live stream will also feature some information on FH5, with the show set to include Mexican street artist Farid Rueda in a discussion of the murals seen in the launch trailer. It all gets underway at 1600 UTC, and you can watch it below: